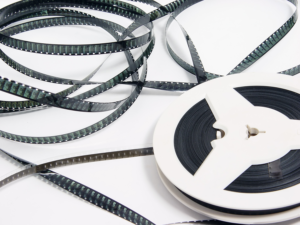 First of all, let’s get this out of the way: I have no degrees in English, Creative Writing, or any credentials of any kind as far as Literature goes. What I do have is 5 decades as a consumer of fiction; written, spoken, visual, and other. I am a voracious reader, usually reading 3-4 books at a time, unless I’m reading nonfiction, in which case I tend to concentrate more and read slower.

So, having read thousands of books, and watched hundreds of TV show episodes, I’m very familiar with non-linear storytelling, it’s use, and too frequently, it’s abuse. 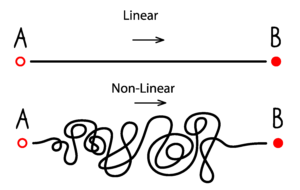 What is Non-Linear Storytelling?

Picture your favorite long running TV show. Inevitably, there’s an episode or two (or six or 12, depending on how lazy the writers are) where the show’s pre-credit stinger starts off with the protagonists in a very bad or unlikely situation.  The scene unfolds to a point of high tension (Will these best friends actually shoot at each other?) before the Intro rolls and we go to commercial. After the commercial, we get a text crawl at the bottom of the screen saying “36 hours ago” or some such, indicating we’re going to step back in time and discover just how our heroes found themselves in such a precarious situation.

It’s a technique, a bit of artifice to try and build tension because the writers couldn’t do the work of maintaining your interest without some threat. To be fair to the TV folks, they have to write multiple scripts in a short period of time, so sometimes shortcuts are unavoidable. There are also times when nonlinear storytelling can be extremely effective in visual media.

Take the show Arrow for example. Most TV episodes have an A story and a B story; the A is the lead, and the B is a side story that often either plays into the A story or addresses the episode theme from another point of view. And sometimes the B story is there to keep the supporting cast happy. In Arrow, the B story was almost always a flashback, or in the latter seasons, a flash forward. It performed two functions. It filled in the five-year gap between Oliver Queen’s disappearance and reappearance, and it almost always provided motivation for his actions in the A story.

It added depth to the storyline without feeling like a gimmick to grab your attention.

What’s Wrong with It?

In my opinion, it’s usually a sign that the writer can’t build an effective opening scene, so they cheat by starting with the climax.

As writers, we’re told that we must hook our audience as quickly as possible or we’ll lose them forever, and that’s not wrong. I know one author who is kind enough to review stories for new writers, and his standard is they get three paragraphs for a short story, or three pages for a novel to capture his attention. If they can’t do it by then, he stops.

That’s pretty harsh, but I know another editor/publisher who lowers that to three sentences.

So there’s tremendous pressure on a writer, particularly a new one who is striving to build an audience, to hook the reader early. In most cases that I’ve read, the writer uses the climax as a hook, but then is back to square one, trying to maintain the reader’s interest as he slogs through the set up. It doesn’t eliminate the need for tight writing at the beginning of the story; it just postpones it. And worse, now, after teasing the reader, then forcing him to wade through the set up, you absolutely must nail the pay-off. Anticipation is a wonderful thing, unless you leave your reader hanging with a bail-out ending.

Then you may lose them forever.

So Why am I Using it?

Because I’m cursed. Inevitably, when I say I don’t like to do something, within moments, I’m being forced to do it.

My protagonist is a Paladin with PTSD. He faced a horrendous battle, and now has been retired from combat duties to act as an administrator and adjudicator. So of course, he’s thrown into conflict and combat.

I started writing the story linearly, with his arrival in the village and the low-level conflict he was sent to resolve. I wove the information about his PTSD and its causes into the story, then started the big fight. But as I wrote, something felt off to me. The first battle, the one in the past, was so horrific, and played such a huge role in his actions in the present, that I dint feel comfortable having it happen off screen. I rewrote it, fleshing out the battle as more or less a prol0gue to the main action, but it was too big; it dominated the first half of the story, making the resolution feel anticlimactic.

So I went non-linear. I started with the present day fight, segued to the past, then returned to the present battle. This minimized the initiating event of the story, his presence in the town to adjudicate some small matter, but that was okay. That part of the plot wasn’t critical. What was critical was his response to the earlier battle, and how it colors his response to the current one.

Shorter version: I’m using the technique because the story told me to.

Let the Story Tell Itself

That’s what I’m doing. I’m a pantser; it’s what I do anyway. I let the story tell itself. It goes much more smoothly that way. Is it the right thing in this case?  I honestly won’t know until I finish the story and get it to a couple of beta readers. All I can say with assurance right now is the story is flowing much better than it was when I tried to do it with a linear narrative. 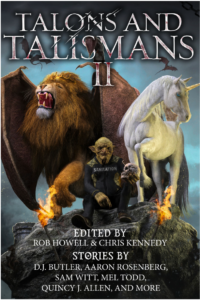 My 2 Cents
Scroll to top